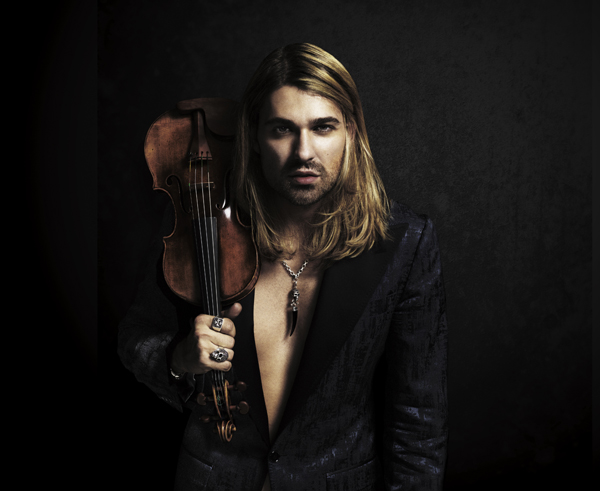 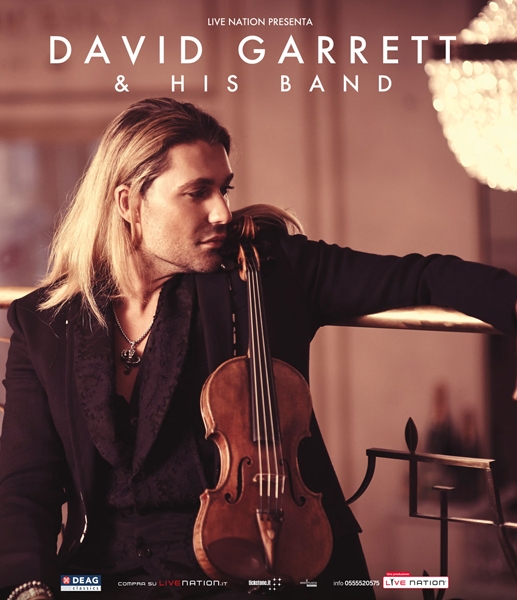 Madonna calls him the Brad Pitt of classic and rock and Sting says there is just one man who can play Vivaldi and AC/DC in the same concert.

He is David Garrett  the finest and fastest violinist of his generation, described as the Beckham of the classical world.

A virtuoso and a maverick, 30-year-old Garrett is trail-blazing a unique career as both a classical and crossover performer.

His relaxed brilliance and eclectic style has breathed new life into the classical musical market, drawing in an exceptionally broad fan base from the sophisticated black-tie concert hall audience to the head-banging, hip-swaying stadium-going youth.

As someone who has spent more hours playing violin than he has sleeping, Garrett is enjoying international superstardom, sweeping up platinum and gold awards around the world for both his CDs and DVDs.

His latest album, Rock Symphonies, which brings together Garretts two passions of rock and classical music, is set to do the same.

Recorded with the City of Prague Orchestra, Rock Symphonies is a tribute to Garretts favourite bands with his unparalleled compositions of rock music fused with classical greats such as Vivaldis Four Seasons and U2s Vertigo.

Classical music has always been sexy but people have forgotten about it, says Garrett. So I thought Id do a core rock and classical crossover album to remind people just how powerful both these genres of music are. This is about engaging a new and younger audience.

With his impeccable musical instinct, Garrett insists there are strong connections between classical compositions and rock anthems. Beethoven, Chopin, Liszt and Paganini were the rock musicians of their day and they went out of their way to delight the masses, he says. Classical music, like Beethoven, has a strong, powerful sense of rhythm just like rock music and AC/DC, for example. A passage in Mozarts Turkish March has nearly the same harmonic progression as Michael Jacksons Smooth Criminal. It all goes to show that music has hardly changed over 250 years.

In this way, an orchestras brass section or percussion section, for example, lend themselves easily to the rock bass and drums while the violin bridges the gap beautifully.

The hardest part for me is writing the orchestral arrangements but when it blends brilliantly, an orchestra elevates rock music to an exciting and ground-breaking level, explains Garrett.

His vibrant approach has succeeded in achieving his goal of bringing classical music to a young audience. With line-ups including arrangements as diverse as Jimi Hendrix, Brahms, Michael Jackson, Bach and Metallica its no surprise that youngsters are leaving his concerts, waving his CDs and begging their parents for a violin.

I always wanted to break the ice with classical music and I refuse to think in fixed categories. My goal is to inspire a younger audience so to see small children, teenagers and the twenty-somethings enjoying Beethoven, Bach and Brahms along with the older audiences is a dream come true, he says.

To reach such a wide market is a rare talent and one which Cadburys spotted when they used Garretts unique, hard-rock head-banging rendition of Beethovens 5th as the sound-bed for their hugely successful Fingers commercial campaign.

But as Garrett acknowledges: You need to be a world class violinist in order to record an excellent crossover CD and the performance standard at least equal to that demanded of classical works.

Crossover is the antithesis of covers albums because you have to view every song from a unique angle to the original and sometimes even change the entire character of the piece. Beethoven was definitely not a follower and neither am I.

But then Garrett has always played with the best and has always had talent to spare. From the age of eight, he was playing solo with leading international orchestras from the London Philharmonic, the Los Angeles Philharmonic and the Russian National Orchestra.

At just ten years old he performed as a soloist with Hamburg Philharmonic Orchestra and at 12 with the legendary violin virtuoso Yehudi Menuhin, becoming the youngest artist to sign to Deutsche Grammophon at the age of 13, and was being taught by the revered violinist Ida Haendel.

Garretts played at parliaments and palaces, for presidents, chancellors and Popes. His performances are nothing short of mesmerizing, including his ability to play 13 notes per second which enabled him to become the Guinness Book of Records 2010 world record holder for the fastest violin playing, twice breaking the record for the quickest ever rendition of Rimsky-Korsakovs Flight of The Bumblebee.

Garrett maybe garnering new audiences and sell-out tours with his cutting-edge material but he also has an active classical career, playing concertos with traditional symphony orchestras and recording as many core classical CDs as crossover.

My work comprises of 50 per cent classical and 50 per cent crossover. I never neglect classical as its the foundation of all music, insists Garrett who has sold nearly 2 million albums, including his first crossover, Virtuoso in 2007, which achieved golden status and was followed by another in 2008, entitled Encore which went platinum. In 2009, Garrett returned to core classical with Classical Romance which included a Mendelssohn violin concerto and arrangements of seven small works centered around this composer.

Born in Germany to an American ballerina mother and German lawyer father, Garrett first picked up a violin at the age of four in an act of defiance to outwit his older brother who played. Whatever my brother did, I had to not only copy, but try to outdo him, laughs Garrett. Ive always been extremely competitive but can also apply the utmost discipline to whatever I do.

His exceptional focus meant it wasnt long before his parents found themselves driving and managing his international solo career. The word child prodigy has all the wrong connotations for me, admits Garrett. This is because it doesnt take into account the many sacrifices I had to make like being made to practice until 1am, being home schooled, travelling hours to and from violin tutors, living in an adult-only world and being deprived of a normal childhood.

Its no surprise that Garrett reached breaking point at the age of 17 when, without telling his parents, he fled to New York where he abandoned his violin and threw himself into long-overdue hedonistic pastime rock music and romance.

With his innate good-looks which have won him modelling jobs in Vogue, on Armanis catwalk and, more recently, with a contract for Banana Republic, Garrett has become an inevitable pin-up and heart-throb.

I may have lost my childhood, but Im enjoying the benefits of the hard work my violin is bringing me now, smiles Garrett who is a former GQ Man of The Year and is now the face of Audi, as well as an ambassador for Sony and Montblanc.

It wasnt long before he began to miss the integral part of his life - his violin so he enrolled in New Yorks prestigious Juilliard School of Music where he was invited to join the studio of the legendary master instructor Itzhak Perlman.

I had to decide whether to party my life away or become a world-class violinist, he recalls. Even though I had to pay my own fees and got $25,000 in debt because my parents refused to help because Id gone so far away from home, it was a life-changing decision.

It was at Juilliard that he laid the foundations to his outstanding arrangement skills and perfect technique and where he received his diploma, and a distinction for a composition in the style of Bach.

My teachers were all an enormous inspiration. I may have broken the world record for speed, but playing the violin is all about an excellent technique, explains Garrett.

It is this technique which has given Garrett the stamina to sustain awe-inspiringly long sets to audiences of 15,000 per night whom he dazzles with a mixture of raw energy and electrifying passion.

In this way, Billboard Magazine listed him among the biggest grossing live artists of 2010 and we can now look forward to European tour at the end of 2011.

The European tour and my album, Rock Symphonies, are yet more opportunities to arouse curiosity and a hunger for classical music newcomers, says Garrett. 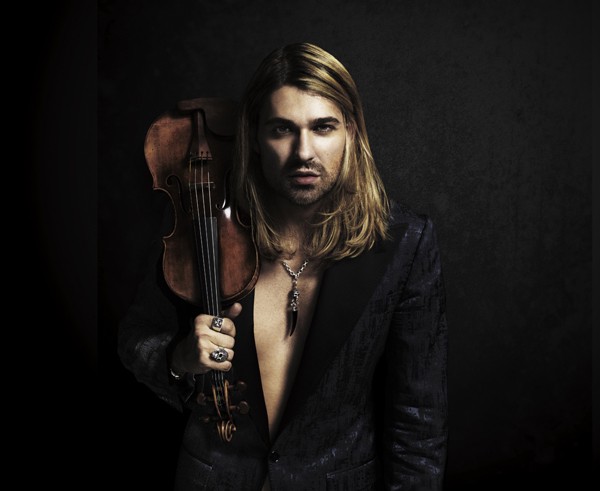